The Call of Duty Black Ops 3 beta key hunt has well and truly kicked off with some gamers receiving problems when inputting their redeem code, or others not wanting to pre-order and trying to access the maps by using free methods. Also, we are seeing many questions in regard to what countries work with the COD Black Ops 3 beta and wondering if Asia is included.

One region having issues is Europe and a few Product Reviews readers have spoken about an error message for Black Ops 3 beta stating, “The redemption code you have entered is invalid. Please re-enter your code”. Even after trying this, in many cases you’re told to contact support and some gamers can’t get this to work either through the provided links. 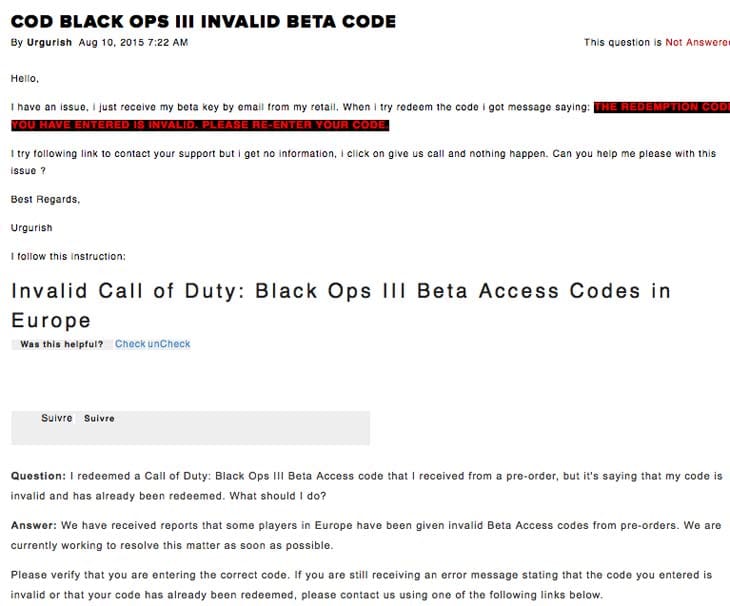 COD Black Ops 3 beta invalid redeem codes confirmed – we have heard from official support channels that players in Europe have been given “invalid Beta Access codes from pre-orders”. They are working to fix the problem, so if you are being told the code has been entered already or the BO3 beta key is invalid, then contact Activision support for PS4, Xbox One, or PC.

Have you had problems entering the Black Ops 3 beta key and if so, did you receive the invalid redeem code error? If you are one of those impacted by these issues, then leave a comment with your country as well. Also, it will be good to hear if support has helped anyone with a new beta code.

Update Aug 19: Due to it being launch day for the beta on PS4, we are seeing reports of Black Ops 3 beta invalid codes on Twitter and forums. It’s common now to see “my Black Ops 3 beta key says it’s invalid” tweets every hour, and then gamers asking for help.