Sledgehammer Games is aware that Call of Duty Advanced Warfare servers are down right now on PS3 and PS4. The confirmation arrived on Twitter on March 20, at 5PM in the UK and around 10AM PST, although reasons for the outage wasn’t given right away.

If you are playing COD Advanced Warfare on PS4, or PS3, then you shouldn’t be able to connect to the servers right now according to the official statement. You can see the tweet below, which basically explained “We’re aware of the PS4/PS3 Advanced Warfare connection issues and we’re working to resolve this ASAP”. 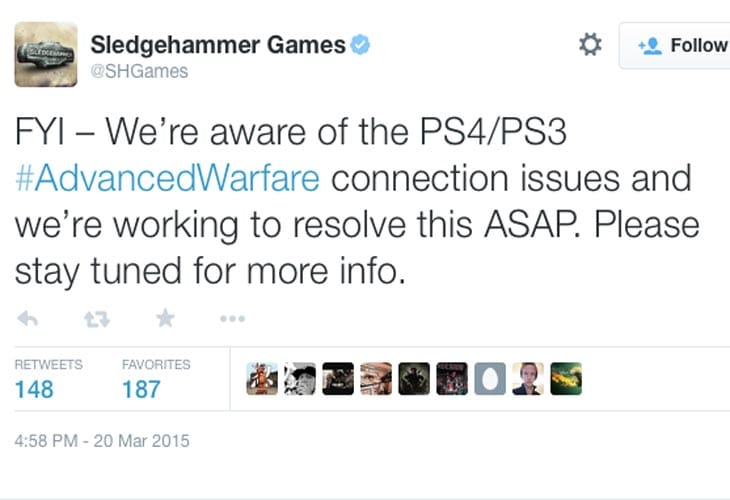 Are you having problems with COD Advanced Warfare servers today and if they are down for you, what location are you in? As per normal, you are advised to keep an eye on the official Sledgehammer Games Twitter channel for more information and for any ETA in regard to servers coming back online.

The new PSN status page is reporting all servers up and without issues at this time, although routine maintenance will be taking place on March 23 between 9am-11:30am PST.

Update: The message most PlayStation users are seeing states, “Call of Duty: Advanced Warfare service is not available at this time” and this is the pretty standard message that always appears when servers run into problems.

Update 2: It’s now clear the problem is with PlayStation Network and not Call of Duty servers. You can see the PSN status update in this article.