The Call of Duty: Advanced Warfare crashing error some of you are experiencing isn’t going away, and today we received a few more reports about crashes and freezing with COD Advanced Warfare in Exo survival mode. In fact, one of the reports touches on the exact parent script variables error we saw during our review on PS4.

One of Product Reviews readers said, “I have just finished a 2-hour session on Exo mode in COD Advanced Warfare after the game crashed. It’s really upsetting to spend that much time playing and then get chucked out of the survival mode game with the error exceeded maximum number of parent script variables”. 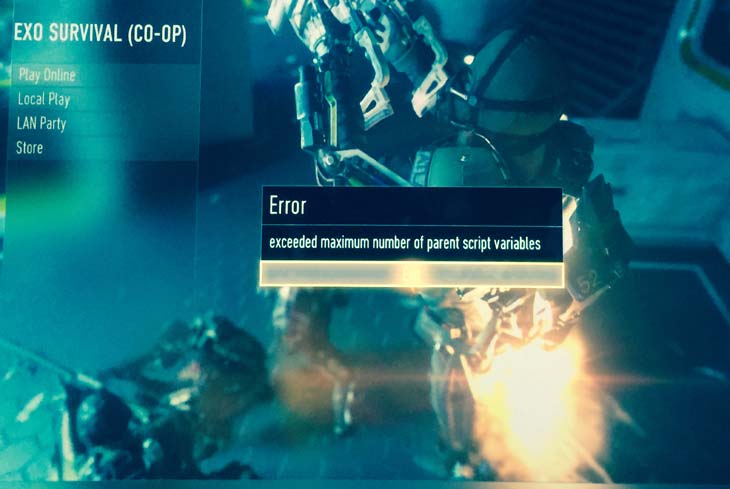 This isn’t the only complaint we have had and you can see screenshots on this page taken from a PS4. We first noticed this crashing problem around 10 days ago, although this follows over 200 comments in relation to freezing within Advanced Warfare.

There’s been a game patch since our last two articles and it seems like this problem hasn’t been fixed to date. We are expecting the 1.07 update for COD Advanced Warfare today, which is live right now on PS3 and Xbox 360, but not PS4 at the time of writing.

Have you seen crashing within the Exo or multiplayer models for Advanced Warfare and if so, what platform are you playing on? This parent script variables error is very specific and we thought the developers would have addressed it by now.

My #AdvancedWarfare keeps crashing, I'm sure it's not my PS3 as it's pretty much new. Anyone got the same problem? @SHGames @OMGitsAliA

It'd be great if I could play advanced warfare without crashing twice every mission..

Update: We have also seen a number of messages on Twitter from within the last few hours, which can be seen above and highlight that the crashes are not just related to PS4. The tweets above mention PS3 and we’ve seen reports about Xbox 360 issues as well.