If you love playing first-person shooter games such as the Call of Duty titles and you own an Apple Mac, then I think I may just have some good news for you. It appears that the COD 4: Modern Warfare game has recently been released onto the Mac App Store.

However, according to a recent article over at electricpig.co.uk by Mic Wright, there is a bit of disappointing news to go with it, and that’s the price. The COD 4: Modern Warfare game is currently priced up at £17 at Amazon, while the price on the Mac App Store is £29.99. 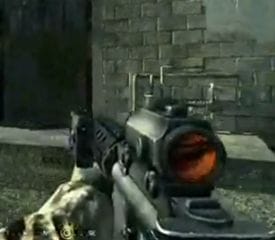 As Mic Wright notes in his article, there’s no box to produce or postage to pay, so that price may seem a little steep. If you don’t mind paying that price however and you’re after downloading the game, then be aware that it does come in at over 6GB.

You can read more about the game and the recommended/minimum system requirements — which includes a CPU speed of 2GHz, 1GB RAM and hard disk space of 8GB — over at the itunes.apple.com website. The COD 4: Modern Warfare app does require Mac OS X 10.6.6 or later.