Just over two months ago we heard the Motorola Droid Bionic was going to release soon, according to an official statement from the Motorola Mobility Media Center. The first DROID was released around 2-years ago, and the new Verizon Droid Bionic will bring a new form that is based on what the user apparently wants, and if the hype is anything to go by, it could be one of the best Motorola phones in 2011.

It looks like we’re one step closer to the Motorola Droid Bionic after an apparent FCC filing, which includes wireless standards b/g/n, EVDO and LTE at 700MHz, and an inductive charging battery cover, which points to only one device on our minds, the Droid Bionic.

You can see the full FCC filing on two pages via the official website, this page and here, although there are no photos or user manual for the possible Droid Bionic filing. One of the PDF files points to a confidentiality request regarding the “application for certification of FCC ID: IHDT56MX1”. The file found here outlines what documents are marked confidential; these include transmitter characteristics, parts list and tune up procedures, schematic and block diagrams. The file continues to state “Motorola Mobility, Inc. requests that these exhibits be held as Permanently Confidential, and not be made routinely available for public inspection. Motorola considers that the information in these exhibits should be classified as trade secrets, pursuant to 47 CFR Section 0.457(d) and Section 552(b)(4) of the Freedom of Information Act”.

This is because Motorola feel that the public disclosure of these materials may be harmful to them, and provide a benefit to its competitors. For now you’ll have to wait a few more weeks until the official photos and user manual are made public. If this FCC filing really turns out to be for the Droid Bionic, then we’re pretty close to a release, which ties in with the promise of a “summer” release.

You can see one picture that was allowed to be made public below, expect more information to follow in the coming days and weeks. As always keep updated with PR via our apps, Twitter and Facebook. 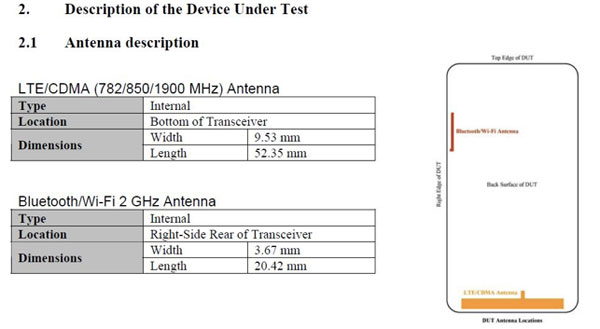 Some of the recent news and rumors surrounding the Droid Bionic release include a few reasons why the summer release is still on, the social impact of the Droid Bionic and Samsung Galaxy S II (aka S2), and a list of upcoming Motorola phones for 2011.