If you haven’t heard, a new Clash of Clans update is coming and for those that missed it we can give you a heads-up on what is coming with early release of the Clash of Clans January 2016 update notes preview.

Developers Supercell have let fans know what they will be introducing next and we now know this is going to be the Clash of Clans Star Bonus, Treasury and Loot Cart features.

Star Bonus will grant a daily resource bonus to those that manage a five-star multiplayer attack rating, while the Treasury will offer the ‘safest’ place to store resources such as daily star bonuses and also war loot bonuses. 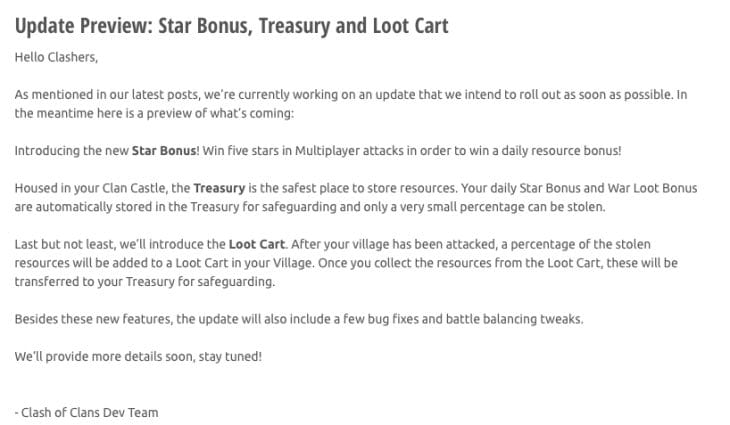 Also coming in the new CoC update for January 2016 is the Loot Cart. This will calculate a percentage of stolen loot after being attacked, allowing you to send the loot to the Treasury for safe keeping.

Supercell will also be providing more bug fixes and tweaks to existing features. They said on January 12 that the update was ‘just around the corner’, meaning that we could see this Clash of Clans update on January 19 or January 20 since updates have traditionally happened on Tuesdays and Wednesdays.

Remember that this is just a preview of the notes. Once the update is live we will update this article with details on the official patch notes.

What are your thoughts on the first Clash of Clans update after TH11 – happy with the new changes or not?