The Clash of Clans maintenance break has finished for January 26, 2016 but straight away we can see that many players are having problems with Clash of Clans device not compatible messages after trying to update.

We’re not sure what is going on, but this is the second time in a row where players have suffered problems with the Android version specifically – iOS seems to be ok.

In the last update on Android, we also told you about how the Clash of Clans update was not on the Google Play Store – is this happening again for you?

Right now, we know for a fact that the Clash of Clans update is not working on Android and you can see the message that everyone is getting with the image below. 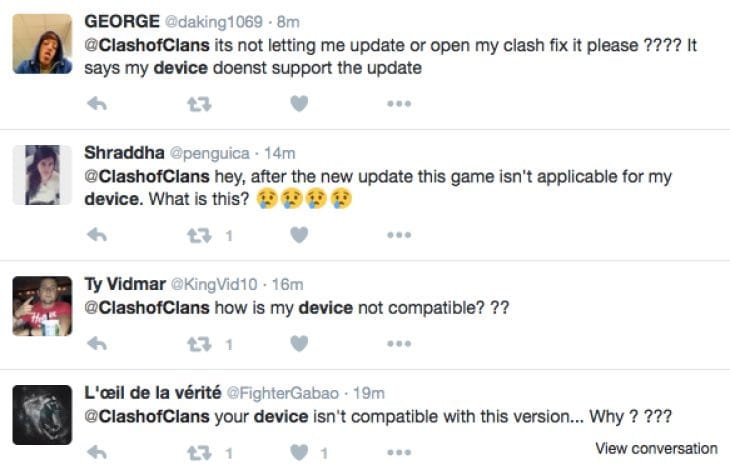 Just to point out, the same message is happening on new devices as well as old on the latest version of Android 5.1 Lollipop. That includes the likes of Samsung Galaxy S5, S6, LG G2 and many more.

We will bring you updates on this situation as we get it, but for now Supercell has not said anything about specific Android problems on Twitter.

Are you getting Clash of Clans device not compatible errors when installing the new update on January 26,2016? If so, what device are you using?

We will update this article as necessary.

Update: Supercell has now posted a Clash of Clans ‘device not compatible’ fix for those having problems. Try it and let us know if it works for you.

Players affected by "Your device is not compatible with this version", please try: Settings >App Manager>Google Play Store>Clear data/cache