With the new Clash of Clans update now live, many players are going crazy with the amount of new features that Supercell have added – in a good way of course. Those who are already looking for a Clash of Clans Skeleton Trap strategy have some to the right place as we have found some gameplay from one user who already has a maxed out Skeleton Trap in the game.

That is obviously very quick considering the update has just gone live, but it’s clear that there’s a lot of excitement at the moment for the game and definitely a great time to jump back into the servers if you had previously taken a break.

We can tell you that each Skeleton Trap can currently be upgraded to Level 3 and each trap can hold four units. You’ll see what this looks like in the clip below as the player just spends all of his resources to instantly max out everything there and then. 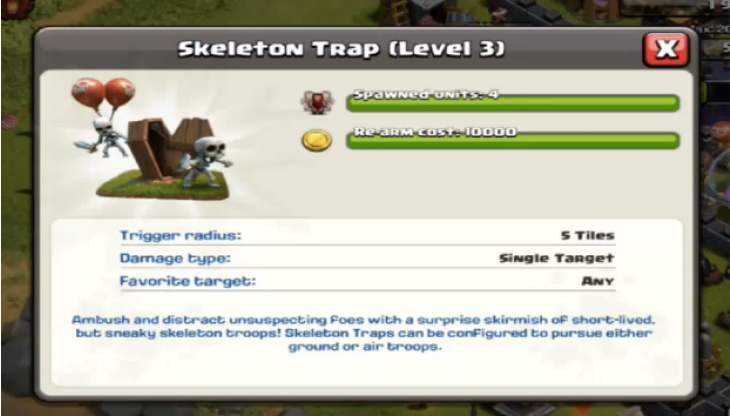 One of the best aspects of the traps is that they can be deployed either on ground or on the air. You can see both ground and air deployment in the 3 minute gameplay that has been provided by YouTuber JAMIExELITE.

More importantly, the video will serve you well when it comes to deciding your own Clash of Clans Skeleton Trap strategy that you are planning after playing on the latest update.

Have you already maxed out your traps? Let us know your thoughts on how they operate, both on ground and in the air.