Clash of Clans players have something very exciting to look forward to now in preparation for the Clash of Clans July update. Developers Supercell have decided to tease one of the big additions that is coming – a Clash of Clans Pekka upgrade to level 5.

We don’t have a date on the update yet, but we have the perfect preview to get you prepared for what is to come. The Pekka level 5 upgrade in Clash of Clans looks fantastic – just look at the new size of the characters in game.

Supercell has now made them just as big as other characters, answering a big request from the community in the process. A tweet by the Clash of Clans developer team confirms that the Pekka level 5 troops will arrive in the game soon. 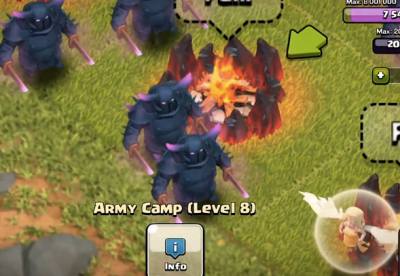 That’s not all though. We can bring you some early gameplay showing the Pekka level 5 in action as they will appear in the game once the July update is out.

Some gamers are questioning why Supercell are bringing level 5 Pekka already, but we think it is a great addition. Remember that it is just one of the many planned updates for July – check out the footage below and let us know what you think.

What are you also hoping to see for the July update?