We can see that Clash of Clans is down at the moment for another Clash of Clans maintenance break on February 5. Is this the moment when Supercell is about to drop a new update on us for February, with lots of new features for us to enjoy?

Hopefully the answer to this question is yes and the Clash of Clans February 2015 update will be upon us very soon. We previously spoke about the idea of Town Hall 11 coming in January, but so far it hasn’t arrived yet.

Right now, the Clash of Clans servers are not working and the official Tweet states that the Dragons and Barbarians event is now coming to an end. 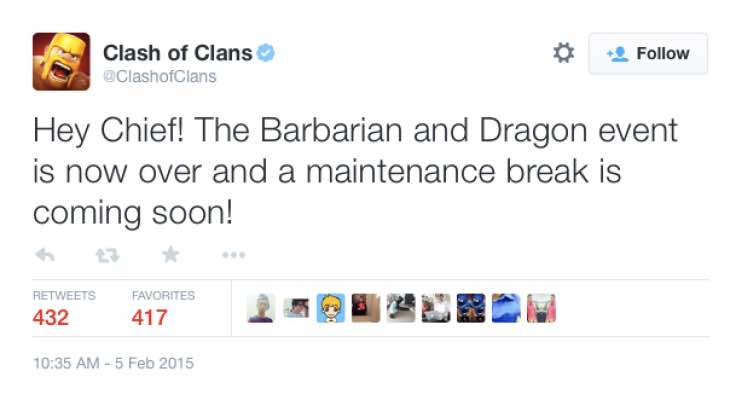 We’ve done some digging around and it may be worth mentioning about some potential Clash of Clans February update notes that have been doing the rounds on social media.

You will be able to view them in the video which we’ve added below, which suggest that Supercell are about to add Mortar Level 9 for Town Hall 10.

There’s also the potential return of the Clash of Clans Waterfall and big changes to the War star system. Obviously we can’t confirm them for you as legit, but as soon as the game goes back up we will know more and can update this once the official Clash of Clans update notes are posted by Supercell.

For now, check out the video below, take a look at the ‘supposed’ leaked image and give us your thoughts.