We have an important heads-up to bring to Clash of Clans players now. Supercell has just sent out a warning on their Twitter page, that Clash of Clans will be down today, for a forced update and maintenance related to the recent Halloween update.

Some players are unhappy about this, but we always knew it wouldn’t be a permanent feature. On a more positive note, it gives Supercell the opportunity to work on the next major update to the game – which could be the Clash of Clans Christmas 2014 update. 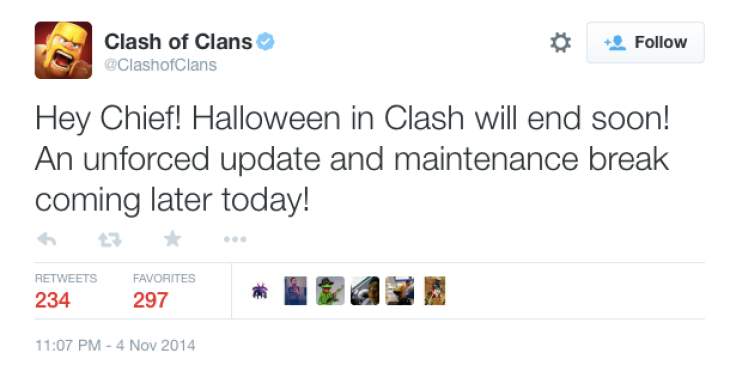 In the meantime, players will hope that Supercell will introduce a new Clash of Clans 1 gem boost this week to make up for the fact that the Halloween content is no longer available.

If you have something to do in the game at the moment, you should get it done as soon as possible as Clash of Clans will be down for a maintenance break on Wednesday very soon.

Did you enjoy the Halloween content? What are your hopes and expectations for the Christmas update in December? Give us your best ideas below!