Attention all Clash of Clans players now, especially for those that are desperately on the look out for some Clash of Clans free gem competitions. Supercell, the developers of the game are holding an official contest, giving players the chance to win a whopping 2000 gems, no questions asked.

The best part of this, is that all players are invited – there’s no location restrictions of any kind which we often see with other games who usually limit such giveaways to US and Canadian residents only.

The terms are simple, all you need to do is put your creative minds to work and come up with some captions to a selection of images that Supercell have provided here on their forums. 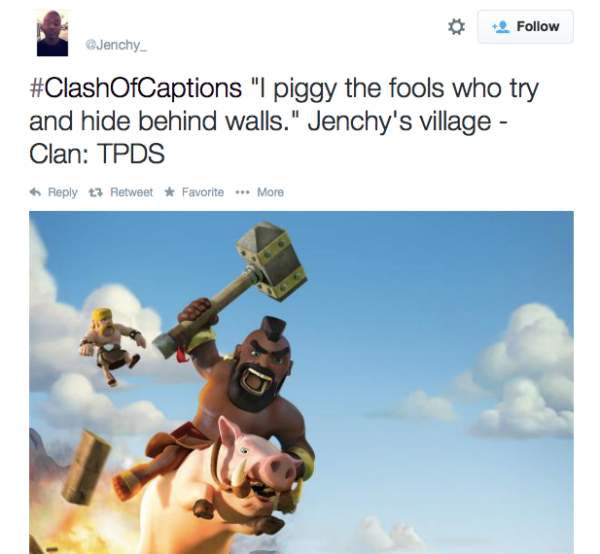 When coming up with your ideas, you’ll need to submit them to either Facebook, Twitter or Instagram using the #ClashOfCaptions hashtag – remember this is important. Entries elsewhere and without the tag will not be considered, states Supercell.

Supercell will also be observing those who try to steal other’s fine efforts in order to smash and grab gems ahead of other players. There’s no date for when the competition results will be announced, but we expect Supercell to drop this info soon.

So there we have it, we’ve included one excellent example mixing in a classic quote from Mr T to delightful effect just to give you an idea how it works.

Remember to follow the format above, listing your village and clan name. Let us know if you think you have a good chance of claiming those 2000 gems.