There’s some Clash of Clans maintenance taking place right now with servers down for a short time on Friday morning, July 31. Once this short break completes, you will be able to benefit from a Clash of Clans 1 gem boost until early August 2015.

The news broke on Twitter with the official account reminding players that “Clash of Clans is three years old”, so they want to reward players with a boost for resource collectors lasting 1 week. The said tweet can be seen below, which explained “Maintenance soon”, although since that message we have seen Android and iOS users report CoC servers are down. 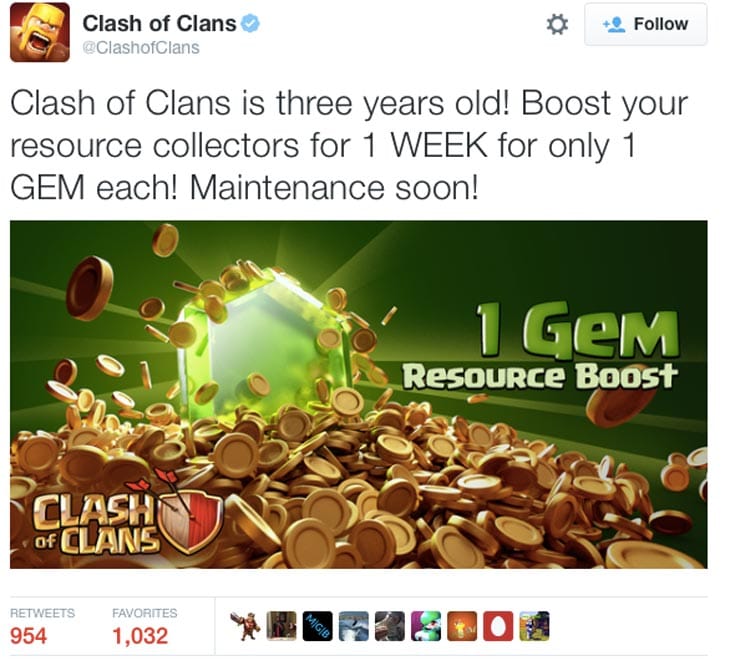 If you count forward 7 days, then this should mean the Clash of Clans 1 gem boost will last until Aug 7, 2015. The exact date it ends hasn’t been confirmed, but it’s a safe bet and you will see another maintenance break in about a week to end this boost.

Are you planning on taking advantage of the Clash of Clans 1 gem boost? While servers are down for maintenance at the time of writing, feel free to leave a comment if you see them come back up. We will also update this article when a tweet details maintenance is over.

Update: The Twitter account just confirmed they’re “back online” and you will be able to keep boosting until the event ends on August 7th.