As far as concept designs go, some never even make it to the production line and tend to be somewhat far-fetched. Heikki Juvonen will be hoping that this isn’t always the case and has the opportunity to make sure first hand that his E-3POD Antistatic makes it as his concept design has landed him a job at Citroen.

According to Engadget the young designer won a six-month placement at Citroen’s PSA Design Centre in Paris after producing this compelling design during a challenge that was set for London’s Royal College of Art students. They were expected to come up with a compact vehicle design that was still aesthetically pleasing.

The E-3POD has a distinctive look, single-seated and electric powered with three wheels that would see the driver sitting inside the largest of the three. According to Heikki is not meant to replace the household car but instead offer an alternative mode of commuting like if you were to take your bicycle. He sees his design as being situated between cars and bikes. You can view the gallery for the design from Heikki Juvonen here. 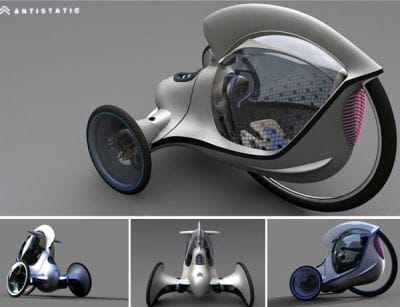 Carscoop says Citroen are delighted to be involved in the project. Philippe Holland of Citroen says the ‘potential car designers of tomorrow’ have produced exceptional ideas for Citroen’s electric cars of the future. He also said he’s glad to see these visions taking into account the importance of the environment and economy when it comes to transport.

Is the Citroen E-3POD something you would consider driving in the future? What are your thoughts on designs like these? Let us know what you think.