We can see that many Final Fantasy XV players are confused as to what the secret key item Cid’s Old Hammer is used for in FFXV and wondering what it does.

This is the item which Cid will give you when you upgrade the Engine Blade III to the Ultima Blade, a weapon that requires the rare item Sturdy Helixhorn – details on how to obtain that are here.

Unfortunately though, it looks like nobody so far has solved the mystery of Cid’s Old Hammer in FFXV. There is a special cutscene which you receive but other than getting a new key item in your inventory there appears to be no other use. 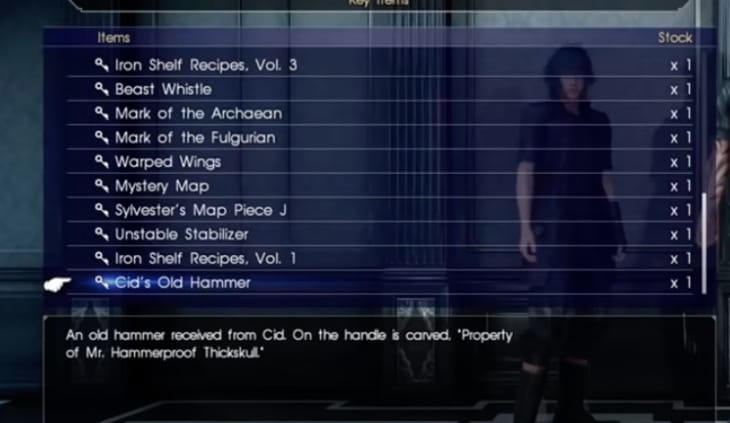 At the moment, there is no hidden quest attached to this weapon and you can’t equip it as a primary weapon. We have a feeling that Square-Enix may be planning to feature this weapon in future FFXV DLC as we’ve see from other instances where the developer has added content in as preparation.

These include Gladious having a scar on his face after returning during story mode which we now know will be inflicted during a DLC battle with Gilgamesh.

Players also recently received a key item Carnival ticket in preparation for an upcoming event, so perhaps Cid’s Old Hammer will play an important part later on in the year.

What are your thoughts on this mystery item, let us know your best ideas below.