When it comes to rental cars, one of the less popular models was the Chrysler Sebring, but the auto company is hoping to change all that with its new 200 Convertible. Just looking over at the spec features and looks, it is hard to understand why this could not happen.

A number of photos were leaked a few days ago ahead of the official unveiling, which you can tell by a recent article on Autoblog — the photographer of the new car was not happy. He has directed his anger at Chrysler — well just one worker really — saying that five weeks work has now been wasted. 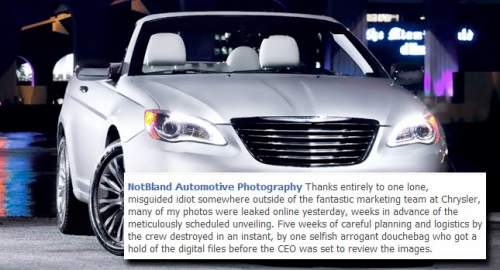 That aside, the Chrysler 200 Convertible certainly has much better styling than the Sebring, but it’s not all about looks. According to Consumer Reports, the automaker has now decided to make a change to the engine lineup, by including the new 3.6-liter V6 engine, which produces 283BHP. There is to also be a smaller more economical 2.4-liter engine, which only pushes out 173BHP.

The new 200 is still a large convertible, which is why rental cars tend to have them, but as the Sebring lacked the fun-factor, as well as looks and performance it was always going to be left sitting there in the rental car park all on their own. Do you think that the 200 is an improvement on the Sebring?