Chromecast is now 7 months olds, although only about two weeks old for those of you in the UK. In that time we have seen several new Chromecast apps for iPad, although not as many as we would have liked. Thankfully, the list is increasing all the time, although it is obvious that Android tablets have greater support.

Google already has a decent list of first-party Chromecast apps for the iPad, but if you want more, then you will have to look for third-party apps instead. This list is a little better and from what we can see so far takes the number of supported apps up to 20, although there could be more.

All we did was run a simple search on the App Store, and we were met with 20 supported apps, although the iPhone has a few more Chromecast apps.

The most obvious app is Chromecast itself, as this is the one you will need to set up your Chromcast dongle. The next one we would advise you to get would be YouTube, as this will allow you to watch YouTube videos on the larger screen. Another app is Photowall for Chromecast, which allows you to use your TV as a larger display in order to show off photos to your friends and family.

Pandora is another great app to use with Chromecast, although this is limited to certain parts of the world. 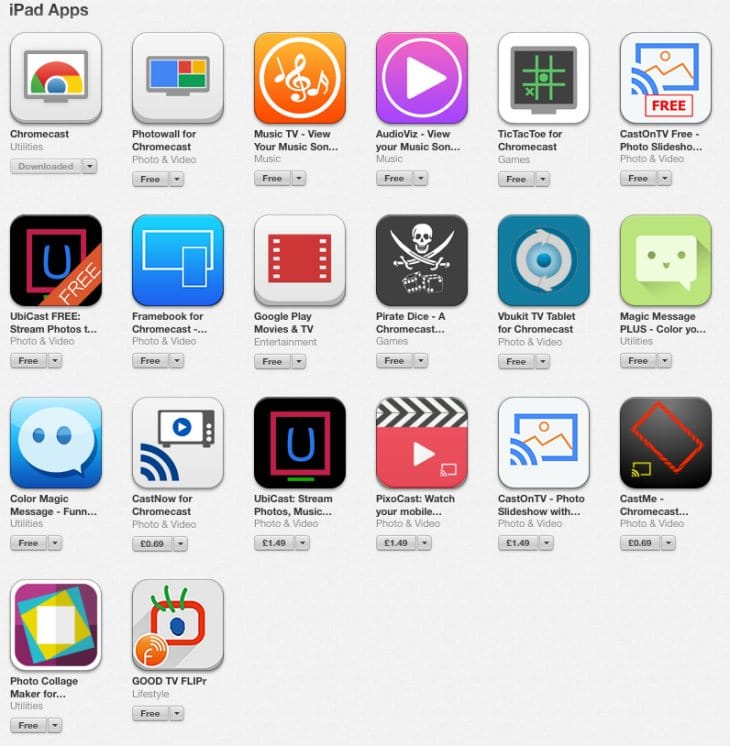 We could keep going on with this list, although it wouldn’t be fair because there are some apps that you will love or hate. And so, we ask that you either look at the image above to see the supported Chromecast apps for the iPad, visit the official Chromecast page, or even look on this Wikipedia page.

Remember, more are being added all the time, and so please feel free to mention these in the comments section below. If you have just got Chromecast and are having issues with setting it up on your iPad, then check out the video below.