Expectations for the Chevy Reaper have been very high considering all the hype that has surrounded the truck, and if you thought the Ford Raptor had nothing to worry about before, then you had best rethink that thought. During the unveiling of Chevrolet’s new truck it was plain to see that from the specs, the features of the new Raptor were truly impressive and has its sights set on one thing and one thing only — watch out Ford.

Looking at the 2014 Chevy Reaper specs we can clearly see why its competitors need to watch their backs because not only is there a decent amount of performance, but price expectations don’t seem to be too bad either.

The engine in the new Chevy Reaper is a partnership between Ligenfelter and Southern Comfort Automotive, and what the two have managed to produce is an engine that will kick some serious butt. 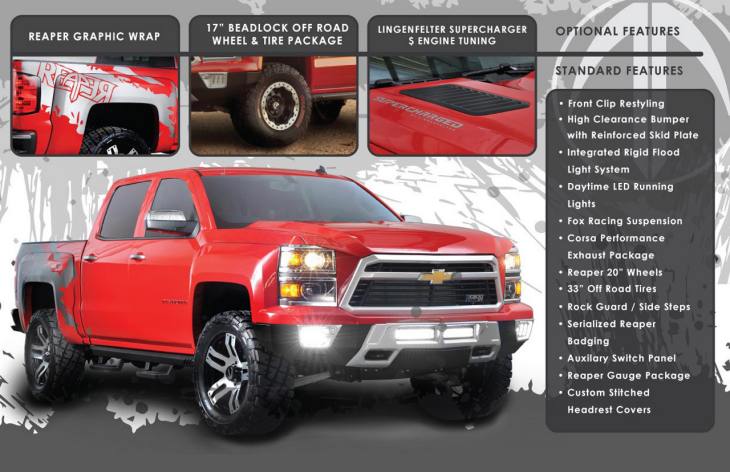 You have a choice of two engines, a 5.3-liter V8 engine producing 475 horsepower or a 6.2-liter that will push out a massive 550 horsepower. Don’t expect an awe-inspiring top speed out of the new Chevrolet Reaper because we know these trucks are all about the torque.

Other features that make the Reaper stand out are the short box exterior layout with what can only be described as a truck that is all about the aggression. However, this will not be achieved with the smaller 17-inch wheels, and so you would be better off going for the larger 20-inch rims instead.

For a few Chevy Reaper images and more details we ask that you watch the video below.