One of the most anticipated games to release this fall, besides FIFA 12 is Batman: Arkham City. While we have been bringing you a fair share of details about EA Sports’ football title, Rocksteady Studios’ action adventure sequel is promising to be one of the best games of the year. If you are undecided about whether you are going to purchase it or not, perhaps the details of this hands-on review of the Challenge Mode will help you make your mind up.

The review comes from Official Xbox Magazine, who of course experienced the game on Microsoft’s console version of the game. For those that are not familiar with challenge mode part of the game, it is a chance to take on hordes of enemies at a time full on, or you could take the stealth approach depending what mood you’re in and what the challenge requires of you.

The aim is to gain points to be top of the Xbox Live leaderboards. During the hands-on, OXM chose to take the role of Batman, although Catwoman is also a playable character in this mode. They found that their experience from Arkham Asylum’s Challenge Mode came in handy, making the first load of enemies easy to defeat.

They describe the multi-counter ability was the most enjoyable feature, meaning when a blue lightning icon appears above an opponent’s head, an instant takedown can be performed by pressing Y. Continuous tapping of this button will also allow you to takedown as many as three enemies at the same time. They also go on to describe the timed counter-attacks and dodging knife slashes. Overall they seemed satisfied saying ‘Arkham City’s combat is the most exciting thing Batman’s faced since Nicole Kidman.’

What do you think of the Challenge Mode? Will you be playing it when you get the new title? 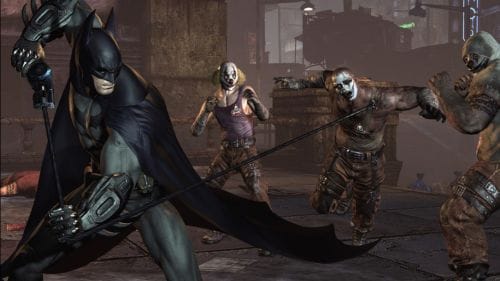