We have some good news if you are a fan of Vizio products, as it looks like the company will be introducing a new tablet device and smartphone at this years Consumer Electronics Show which kicks off soon.

You probably know about Vizio due to their vast array of budget HDTV products, but according to this report from Engadget, they are now starting to venture into the tablet market, with a new 8-inch tablet device which could be running Android OS Honeycomb.

If that wasn’t exciting enough, the company are also planning to release a smartphone in the Summer, a smartphone which will sport a 4-inch display, Android OS, a 5 megapixel camera, WiFi connectivity and also a front-facing camera for video chat – sounds pretty impressive for Vizio doesn’t it?

You can see an early image of both devices below. Notice that the Android UI has been heavily customized, and we have to say that we quite like it. 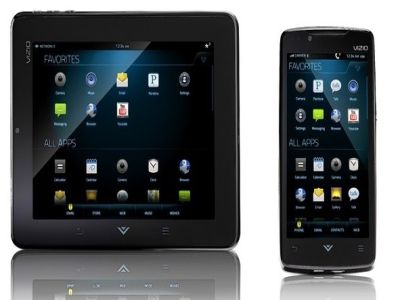 That’s all the details we have at the moment, until a full reveal at CES. Let us know your thoughts on both – the main factor here is price. If Vizio stay true to their roots, these devices could be very popular this Summer.