We’ve already brought you details on a few new products that are currently on show at this year’s Consumer Electronics Show (CES 2011) in Las Vegas, including an Android-based tablet PC from Vizio and a brand new range of Finepix digital cameras from Fujifilm.

Another interesting product that was unveiled during the CES 2011 yesterday is Toyota’s new Entune Multimedia System. According to Mic Wright at electricpig.co.uk, the Toyota Entune system allows you to hook up your smartphone — such as the Apple iPhone or Samsung Galaxy S — to the vehicle, using an app and Bluetooth. 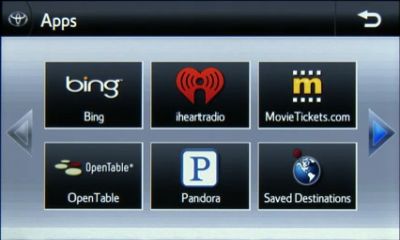 It then gives you access to a dashboard of different mobile apps including Bing Maps, weather, fuel prices, music apps and even movie ticket and restaurant reservations. The apps are all displayed on a touchscreen that is set into the dashboard of your Toyota vehicle.

The Toyota Entune system features an iheartradio app, which provides users with over 750 hometown stations, XM satellite radio and HD radio. It also features USB connectivity and voice recognition, so the driver can keep his focus on the road ahead.

You can read more about the Toyota Entune Multimedia System via the Toyota.com website here. You can see a video of the Entune system in action by visiting the electricpig.co.uk website here.