This past month we’ve seen two types of Cat Jenga videos within the technology and toy product markets, which certainly range in terms of the Jenga brick sizes. The game is really popular as a large garden toy in the summer, an iOS and Android app, and also it now seems with construction and cats.

Massive Jenga game played using 600-lb blocks – We’ve included the Jenga construction trial in the first video below, which some say is the “biggest in the world” with massive bricks being constructed by five CAT Excavators. This project was impressive and revealed how big a game of Jenga could get, although those bricks could never be moved by the cat in our second video that went viral over the last month on YouTube.

Jenga cat video – You can see the Jenga playing cat, named Moe, in the second video and while it’s not the best quality footage the video has managed to receive over 7 million views in 3 weeks since it went online. 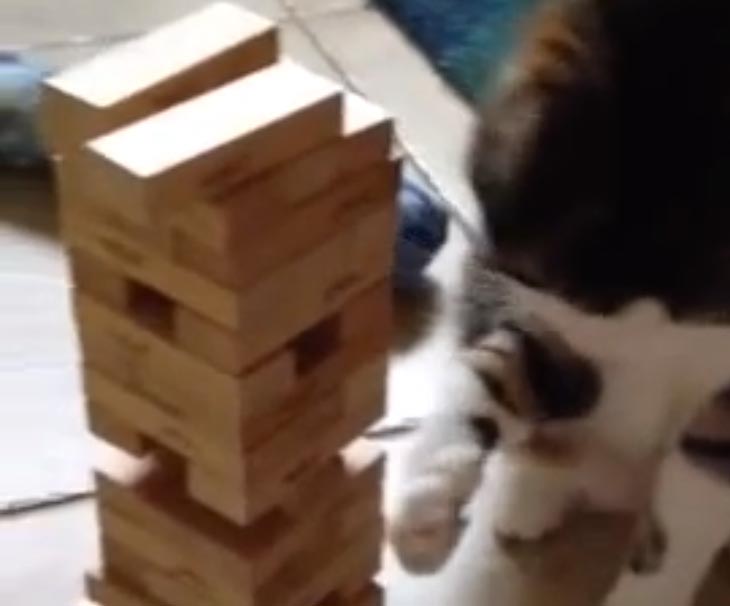 If you love to play Jenga a lot and don’t have the mobile game, then you can download it on Apple’s App Store for iPhone or Android users can head over to the Google play store. It is worth noting that the iOS app hasn’t been updated in over 2 years, although the Android version received an update at the start of 2014.

How far would you take your love of the Jenga game? It is clear some people go to the extreme by playing the game with their pets, playing all summer long in the garden, taking Jenga with them while mobile, or even use CAT Excavators to play the biggest game of them all.