The Cartoon HD app for iPhone and iPad has been building in popularity thanks to its ability to offer free movies, as well as cartoons, although these free downloads seem to be for films that should be paid for and this is why you will experience problems finding the Cartoon HD app on iTunes right now.

In fact, the free Cartoon HD app has vanished completely from the Apple App Store and we found the message below when looking for this application in the US iTunes Store. We found the Cartoon HD app for iPad and iPhone in Google and was told the item requested is not in the US store, but is in the UK store.

After getting the message above we were redirected to the UK iTunes store, and then received another message telling us the free Cartoon HD app is not available to download in the UK store either, as seen in the screenshot below.

You can find out the main features of the Cartoon HD app on iTunes by looking at the cache of the page. This reveals some photos, like in the screenshot below, along with details about the app like being able to watch your “favorite cartoon films”. You would have found the films listed by categories and the ability to watch them in offline mode, also the films were updated daily. 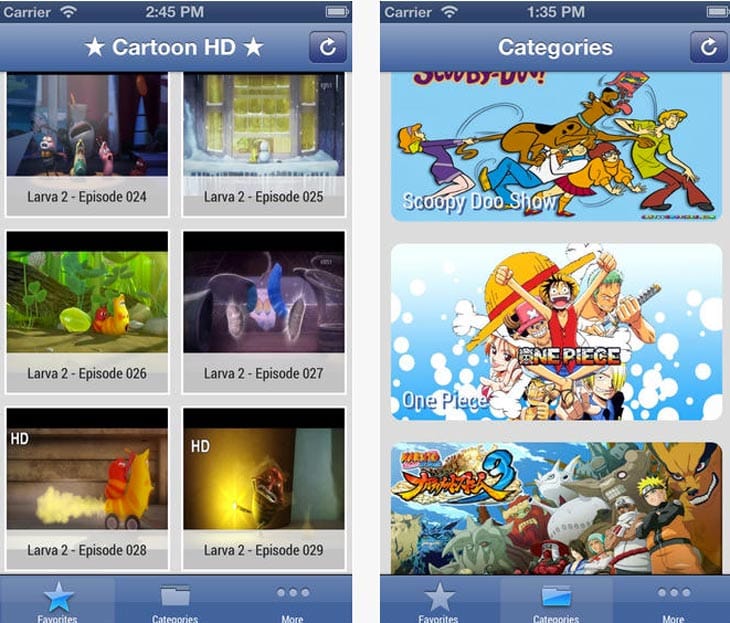 Some still use the Cartoon HD app on iPhone – it is worth noting that we received feedback from Product Reviews readers about this app and some people installed it a few weeks ago before the application was removed from iTunes. “I installed the Cartoon HD app weeks ago and it still works now, although I agree it has been removed from the App Store”, said one reader. Another added, “I heard about the free films at work today and when I got home tried to download the Cartoon HD app, but it is not on the iTunes store anymore”.

We did hear that the Cartoons HD Pro version of this app was still available to download on iTunes, although that is not true and this paid for version has been removed as well.

Some of Product Reviews readers were asking if the Cartoon HD app was legal? The answer should seem obvious now that the application has been removed by Apple, although thousands of potential users are not happy considering they gain access to free films but Apple’s position has been strict on apps like this for a few years.

Did you download the free Cartoon HD app before it was removed, and if so is it still working for you? It is worth pointing out that the application almost reached the number spot on Apple’s App Store in the UK before it got pulled.