Over the years we have seen cars made of strange stuff, but we have to wonder what has been the weirdest? Some of the cars made from alternative materials have still been able to function in the normal way; but they are not the interesting ones. What we like are those made from hemps, Play-Doh etc, the more outrageous the better.

The first car that we have for you is the Chevrolet Orlando that was made from Play-Doh. As you would imagine this was not a working model, and was crafted as part of a publicity stunt. It was blue in color and measured 4.6 meters long and weighed the same as the real Orlando model, which is 1.5-tonne.

Next up we have the BamGoo, which has been made from bamboo. What makes this one strange yet special is the fact that it has an electric vehicle. Now we know how cheap this car will be to run, but not certain about the safety features and how much of the body will be lost on a windy day? 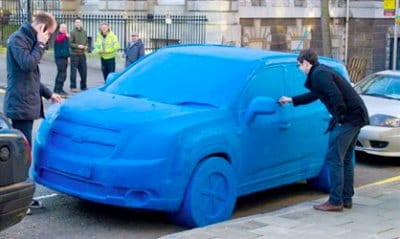 Back in 1941 Henry Ford designed a car that was made from of resin-stiffened hemp fiber. Now this might have seemed strange back then, but when you look at some of the supercars of today, they are also made out of fibers. We all assumed that Ford had lost it, but we all know how strong cars are when made from fibers.

These are just a selection of some of the cars made from strange stuff, what more do you have to offer?