If there was ever a time to show off a German inspired race car then the place to do it would be the Geneva Motor Show in March, which is just what will happen with the Carlsson SLK 340. This is said to be the most unique racecar to date because of the varying construction techniques used in order to build the vehicle.

The World premiere of the Carlsson SLK 340 during the Geneva Motor Show will give us a chance to see those all-important particulars, although we already know some of the significant ones. The engine is a beast as it’s a 3.4-liter V8 engine producing 610 horsepower, which is shocking when you consider the car will only weigh 780 kilograms (just over 1,700 pounds). 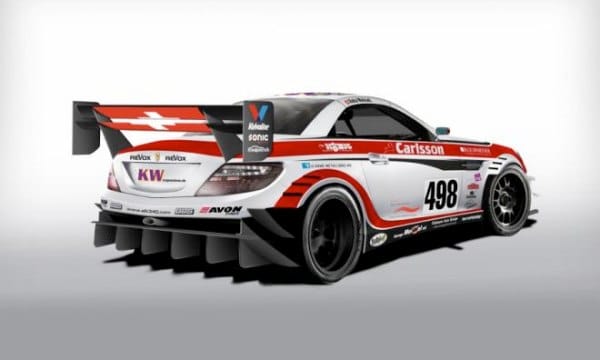 To achieve this lightweight construction the body kit is made from carbon, as well as all the creature comforts you find in most road cars being thrown out and replaced with just a seat and roll cage. However, the car will still need to be pretty tough in order to take the forces from the amount of downforce that the huge rear wing will produce, something that is needed to keep the Carlsson SLK 340 firmly planted on the track.

The Carlsson SLK 340 will compete in International Hill Climb Racing and should prove pretty well in Pikes Peak. Looking at the details of this Carlsson tuned race car it’s hard to tell if it’s 2WD or 4WD, but if it is the former then one has to hope that it does not eat the tires like other high-powered rear-wheel drive vehicles have been known to.