It looks like a secret may have been spoiled earlier as Amazon listed the Dead Rising Collection for sale prematurely. The title which is expected to release soon for Xbox 360 has not actually been officially confirmed yet which has prompted Capcom to deny the listings accuracy despite it already going live.

It appears Amazon has jumped the gun here and at the time of writing the link to the Dead Rising Collection still works, it may be taken down soon once Capcom intervene. Amazon claim that the Collection will be available on January 24th 2014, consisting of Dead Rising from 2006, Dead Rising 2 from 2010 and the Xbox exclusive DR2 DLC packs Case Zero and Case West.

It will be interesting to see if Amazon’s mistake forces Capcom’s hand into making the announcement, a rep from the games studio confirmed to CVG that the listing was an error. 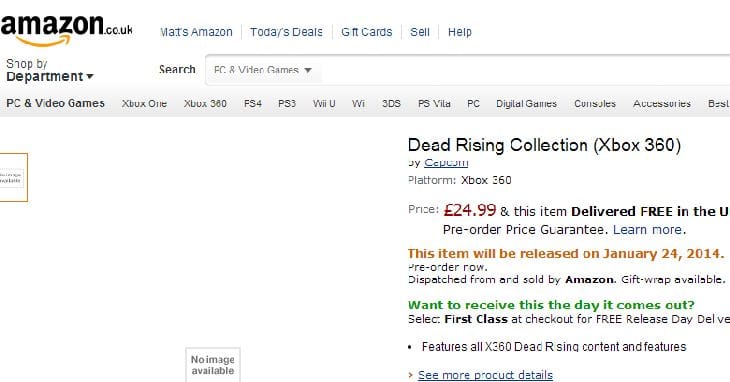 The price of the Dead Rising Collection has been listed as £24.99 on Xbox 360. Dead Rising 3 launched on Xbox One in November with the DLC pack known as ‘Operation Broken Eagle‘ releasing over the Christmas period.

Let us know your thoughts on this unusual conflicting situation, will you be buying the Dead Rising Collection when it becomes available?