We already discussed with you that Canon were updating their rebel DSLR range, well they are doing the same with their PowerShot compact models as well. The news model are the SX230 HS and the SX220 HS, the former offering built-in GPS — the first compact from the camera make to do so – and a choice of five different colors.

No longer will you have to use a separate geotag device, now the SX230 does it all for you; allowing you to tag your photos and upload them to Flickr and Picasa and Google Maps. HS means high sensitivity, so you know that Canon has made a number of improvements to its flagship compact.

Rival cameras like this offer 14x optical, so we were surprised when Crave reported that the SX230 only comes with 12x — maybe they thought that using too much zoom affects the quality of an image with a compact? Having said that, the 3-inch screen and Full HD 1080p video recording more than makes up for it. 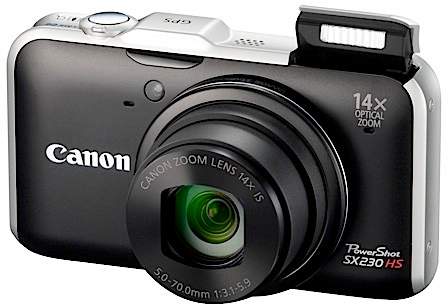 Some of the key features include: 12.1-megapixel, 32 Smart Auto settings, High-speed burst, Manual Control, Waterproof Case and much more. Like the Rebel T3 and T3i, the PowerShot SX220 HS and SX230 will be released in March; although we have no idea of their price.

What Digital Camera has got up close and personal with the SX230, so is able to offer more insight into some of this latest technology that canon has packed in.

Does it matter that the Canon PowerShot SX230 only has a 12x optical zoom?