If you are looking for a brand new camera to buy during the ongoing Cyber Monday sales, you may want to look at what Best Buy are offering. One of their main featured items is the popular Canon PowerShot ELPH 330 HS, so with that in mind we have a quick review as well as a test of the camera for you to take a look at.

Cameras are once again proving to be a big hit among consumers during the busy shopping period. We have taken a look at previous models from Canon such as the Canon PowerShot SX510 HS, but now it’s time to focus in on the
PowerShot ELPH 330 HS.

Specs of this model include a 12.1 megapixel camera sensor, with superior zoom options such as a 10x optical, a 4x digital and a 40x total zoom. There’s also 1080p HD video recording support, as well as optical image stabilization features to allow good quality picture taking when in low light conditions.

This model comes with a standard 3-inch display and a burst shooting mode which can allow you to take 6 pictures every second. Built in WiFi then allows you to take those pictures and share them instantly on your social media spaces ready for quick interaction with friends and family. 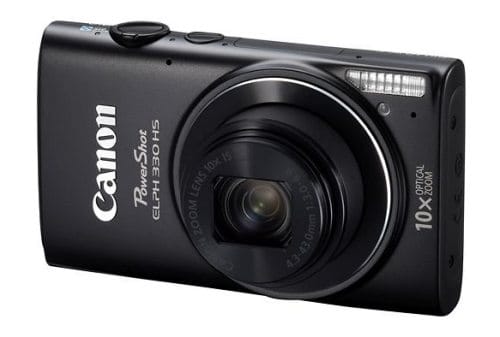 Best Buy are now offering this camera for a fantastic $119.99, which is a big discount from the original price of $199.99. To give you a closer look at this camera, we’ve included a Canon PowerShot ELPH 330 HS review for you to watch below.

It also includes a test to see what the camera quality is like. Let us know if you are tempted to pick one up during the sales. Would you say that Canon’s PowerShot series is the most popular at the moment?