One of the most popular apps last year is Candy Crush Saga, so when its servers go down or the app is not opening, then you can imagine the upset. In some cases Candy Crush loads and then keeps crashing when there’s glitches after an update, or with the server, so mobile gamers will naturally turn to social networks and directly to those behind this app to report said crashes.

We’re hearing about problems with Candy Crush Saga today, 11th Jan 2017, which might be related to a recent update for the game. In fact, we’ve also heard from a number of Product Reviews readers in regard to the Candy Crush app crashing and this could be due to servers going down and the yet to be confirmed outage. 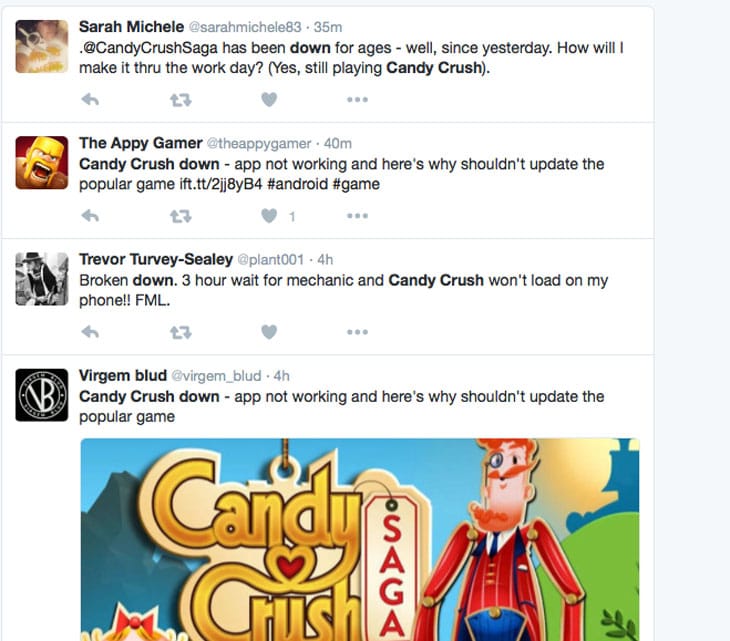 You can see a few tweets above and these include players telling others not to update the Candy Crush app on iOS, or Android devices, and also some have been reporting problems with the app since yesterday.

Are you finding Candy Crush Saga not working on 11th January, 2017? We’ve reached out to the developer and haven’t had a comment, or email, back at the time of writing. This story is developing and when/if we find out what’s going on, we’ll post an update below this article.

UPDATE: The official Twitter page has tweeted about the problems some of our readers have had with Candy Crush Saga in the last couple of hours. They informed followers that there is “difficulties playing Candy Crush Saga” for some people, although the latest update just stated “we’re looking into this issue right now”, so no fix just yet.

Once again, leave a comment below with your location, the platform you’re on, and what problems exactly you have with Candy Crush today.