As expected, Activision unveiled Call of Duty Ghosts to the world during Microsoft’s next generation Xbox event, which we now know as the Xbox One system. Some of you may be disappointed to hear that this won’t be Modern Warfare 4, but Activision has gone on record to say that Ghosts will be the “best COD game that they have ever made”.

That is some statement as well, considering that they believe Ghosts to be better than Black Ops 2, which is obviously an excellent game by Treyarch that is still be played regularly across all platforms. Activision’s Eric Hirschberg is confident enough though, revealing the quote above when showing off the game for the first time.

The company then unveiled the very first debut trailer for Call of Duty Ghosts, which they reiterate is being built on a brand new engine and will take place in a brand new universe. You may also want to know that the trailer that we’ve included above, has been created on the Xbox One hardware – so that will give you an initial glance in graphics potential on the new system, particularly its 8GB of DDR3 RAM spec.

On the subject of DLC, Activision unsurprisingly announced that the Xbox One would again have first dibs on all Call of Duty Ghosts post-release DLC. This is no big surprise to see Microsoft and Activision continuing their partnership from Xbox 360, so you’ll definitely want to pick up Microsoft’s console if you aim to play Call of Duty Ghosts DLC at the very first opportunity. 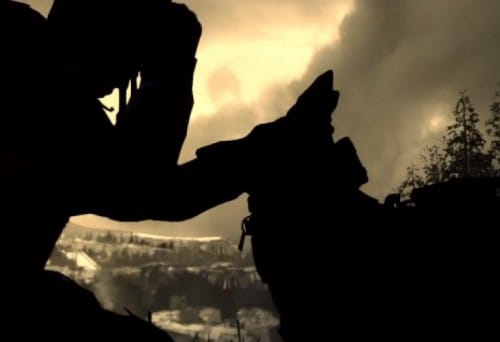 With 60FPS gameplay, the ability to lean around corners, dogs and a brand new team of Ghosts – it is certainly looking a like a brand new experience compared to Modern Warfare 3 and the Black Ops series. We’re also pleased to hear that the story mode is going to be much more compelling this time around as well, with Activision hiring Stephen Gaghan to write the story – a man who has previously worked on films such as Syriana and the oscar-winning Traffic.

Watch the footage above and let us know your thoughts on Call of Duty Ghosts. Let’s hope that they don’t kill off the dog.