Everyone is looking for the Black Friday 2017 deals on Call of Duty WW2 and we have done our best to roundup the best deals available right now for PS4 and Xbox One gamers.

As most of you know, map packs are exclusive on PS4 for 30 days meaning that Sony’s version is the most sought after compared to the two.

Unfortunately though, it appears that retailers have been unwilling to budge on the price for the game as most of our results show the price at £48 across all retailers, except one!

With every year, we know something special can arrive at the last minute and this will likely be on Black Friday, 24th November, itself and we will certainly include the best deals below as they release.

Here’s the best retailers to buy Call of Duty WW2 at for Black Friday 2017, if we see better deals then they’ll be added below:

The best deal on Call of Duty WW2 during the Black Friday period so far is from Base.com who are offering it with a £2 discount and the final price is just £45.85 with free delivery – buy it here before stock runs out. 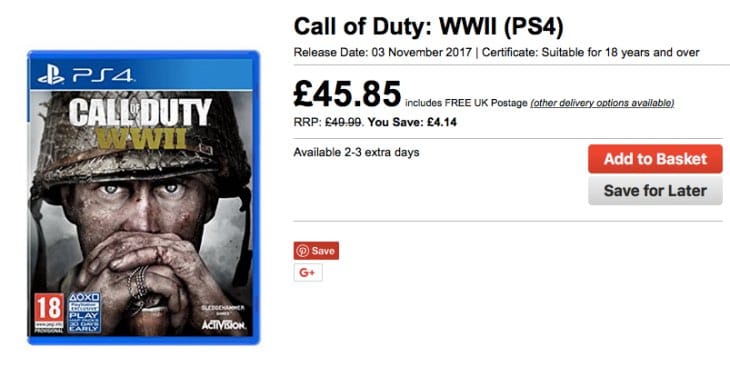 We’ve included all of the links above as Black Friday has only begun. We are predicting that some if not all of the retailers above will lower the price further before November is over so you should still check those links every day to see if the price has dropped.

Have you spotted a better deal on COD WW2 during a Black Friday 2017 Sale that we don’t know about? Let us know below and help other gamers find the best deal.