In the most inevitable piece of news this week, Activision has finally officially confirmed that Call of Duty Ghosts is going to be the next title in the popular shooter franchise. The company also confirmed that COD Ghosts will indeed have a release date of November 5. We now have the debut trailer to show you, and evidence that Microsoft’s Xbox systems will once again take priority before any other platforms.

The debut trailer for Call of Duty Ghosts doesn’t give away much, but what is more significant is that Activision has said that Call of Duty Ghosts gameplay will be available for viewing at Microsoft’s next-generation Xbox reveal, or the Xbox 720 as it has been christened by popular belief.

Microsoft has also chimed in on the announcement of Ghosts, once again reminding the world that the “Call of Duty series has firmly established its home on the Xbox 360, with the game’s largest and most engaged community”, compared to PS3 and PC. The game has been confirmed for the next-gen Xbox first and foremost, but also for ‘other next generation consoles’ as well – so basically it’s coming to PS4, but they couldn’t even mention it by name, as ridiculous as that is. 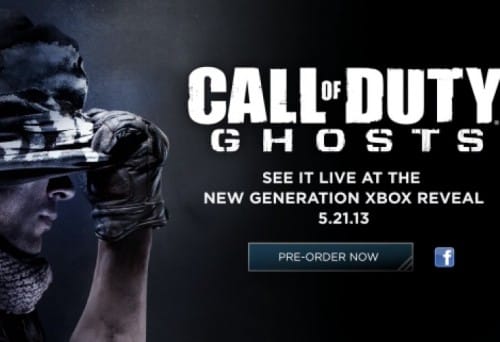 It also means that exclusivity on the Xbox 360 and next Xbox for Call of Duty Ghosts is another certainty at this point, so it’s pretty much business as usual. Ghosts will be coming on a brand new engine which lines up with earlier rumors, and has been described as a ‘new chapter’ for the series, moving on from Modern Warfare 4 – which ‘everyone expected it to be’ – according to Infinity Ward.

Considering that this isn’t a new Modern Warfare game, there may be a lot more interest in the game this time, especially with a brand new engine running the show. We are very interested to see how the Xbox 360 and next-gen Xbox versions differ, as that could become a key area which determines initial new Xbox hardware sales for Microsoft.

As we look forward to the first gameplay on May 21 on the new Xbox, give us your initial reaction to Call of Duty Ghosts. Are you looking forward to another Call of Duty game with Microsoft exclusivity or not?