We know that a lot of you already believe that zombie mode will be included in the upcoming Call of Duty: Black Ops title, but we have found more details for you now which seemingly confirm the return of Nazi Zombies.

Yes, we did mean to say Nazi Zombies too! There had been a lot of speculation on whether the Nazi Zombie theme would fit into the Modern-era style of Black Ops, but it looks as if Treyarch has found a way to balance it out.

We previously told you about some new twitter hints on zombie mode, but now Black Ops zombie mode has also been mentioned in the official strategy guide for the game. It has been listed by both Play-Asia here and GameStop here, the listings both contain the following line: ”Co-op and Nazi Zombie Coverage” 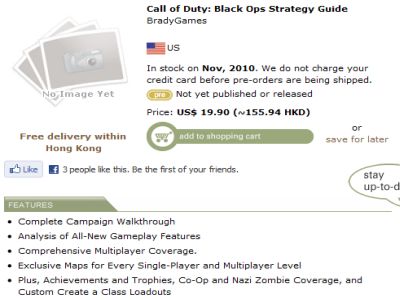 That is probably the clearest indication about zombie mode yet, and also confirms it will be Nazi zombies and not ‘commie’ zombies as previously speculated.

The situation about the four zombie maps from World at War still hasn’t been cleared up yet, so hopefully we will have more details on that soon.

Let us know your thoughts on the new findings.