The Call of Duty: Advanced Warfare midnight launch kicks off tonight in both the UK and USA. Two of the most popular locations in each country would be GAME UK and GameStop for US, although some of you might not have been aware that the game is going to release early in 2014.

Most promotional material detailed the COD Advanced Warfare release date, as Nov 4, but this isn’t the case thanks to a Zero Day launch. In a nutshell, you should head to your local store on Sunday November 2nd.

UK gamers – The offical COD: Advanced Warfare midnight launch event will be hosted in a number of GAME stores, although the main UK event will be live streamed from the Stratford store. All other GAME locations will open doors from 11PM tonight to be well prepared before the midnight release, and at these launch parties there will be time to play the latest Call of Duty game before its release.

You will also find refreshments for everyone attending and most GAME UK stores will be giving away some goodies. You can also pickup the game at other locations like Tesco and Asda, see prices here, but the biggest events will be held in dedicated games stores. 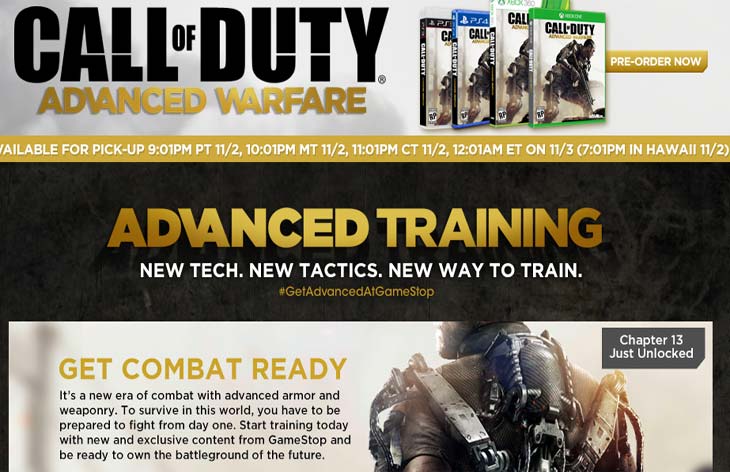 Gamers in the United States – all GameStop stores will hold a midnight launch for COD Advanced Warfare, which starts at 9:01pm PST. As you can see within the screenshot above, pick-ups also start at 10:01PM MT, 11:01PM Central Time, 7:01PM in Hawaii, and finally 12:01PM Eastern Time tomorrow.