In case you were hanging on to the hope that Activision will offer the option to buy Modern Warfare Remastered separately online, we have the confirmation now that this is basically going to be impossible.

As expected, the only way to get Modern Warfare Remastered is by buying one of the four special versions of the game which we told you about here.

That means everyone will be rushing to pre-order Infinite Warfare Legacy Edition for $80 as Modern Warfare Remastered will come as a digital code – not a physical disc. 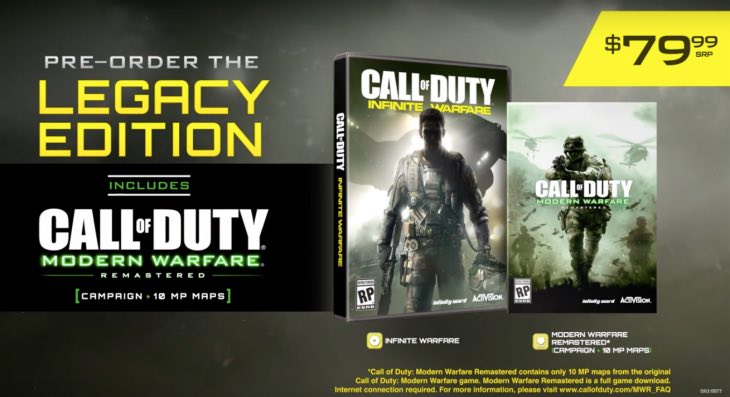 Activision has also confirmed in an FAQ that an internet connection is required to play the game while you’ll be pleased to hear that it is confirmed that Modern Warfare Remastered does have dedicated servers.

While it may be disappointing for some of you to hear about not being able to buy the classic separately, we think overall fans would have expected this anyway.

It is a big chance for Activision to cash in on arguably the best Call of Duty game ever so this was always going to happen. Will you be getting the Legacy Edition of Infinite Warfare without any thought whatsoever?

Do you agree that Modern Warfare is still the best COD game to date?