We have a great heads-up for anyone now, for those that are currently on the search for a new tablet in 2015. Google are giving you a great reason to choose the Nexus 9, as they are offering $50 in free credit with any new purchase before the end of March.

The Nexus 9 was only launched in November 2014 remember, so it is still considered to be one of the top tier 9-inch tablets that you can buy on the market right now.

Simply head to Google’s website and purchase your Nexus 9 from $399 to get the credit. You can also buy the Nexus 6 or Android Wear devices if you prefer as all three products qualify for the promotion. 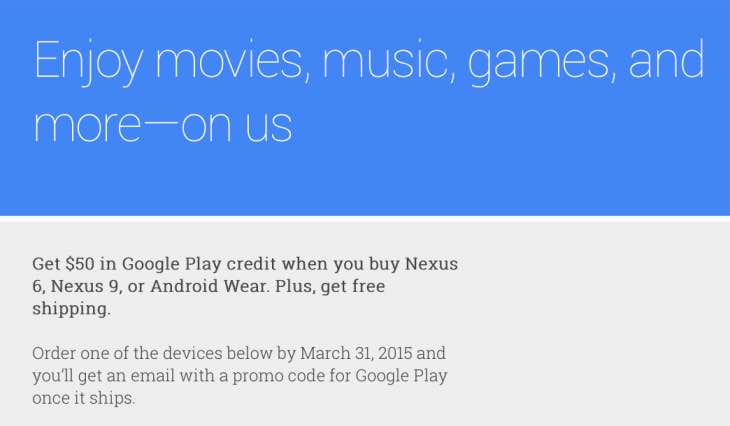 The $50 Google Play Store credit can be used for everything, that includes music, games and movies – no catches whatsoever. The only thing you need to be aware of is that the promotion runs until March 31st 2015.

Once you have made your order, Google will send you an email with the gift code once the tablet has shipped. So essentially, you are picking up a Nexus 9 for just $350.

Let us know if you are tempted to pick up a Nexus 9 this week and take advantage of the $50 free credit – should Apple take note and offer something similar for iPad purchases?