We have seen that hours ago, Bethesda and Microsoft have gone live with the Fallout 4 Season Pass pre-order for Xbox One – which is now available to buy direct on the Xbox Marketplace and at select retailers.

Bethesda’s Pete Hines recently confirmed this too, adding that those looking to buy the Fallout 4 Season Pass on PS4 would have to stay tuned since it didn’t go live at the same time.

However now we can confirm that it is available to buy. You can get the Fallout 4 Season Pass for PS4 right now over at GameStop – follow their link here for the details.

The price is $30 as previously confirmed and it includes all future content for the upcoming games. Some are surprised that the Season Pass pre-order is live before even knowing what the content is – but then again, when has Bethesda ever let you down in terms of DLC for their games? 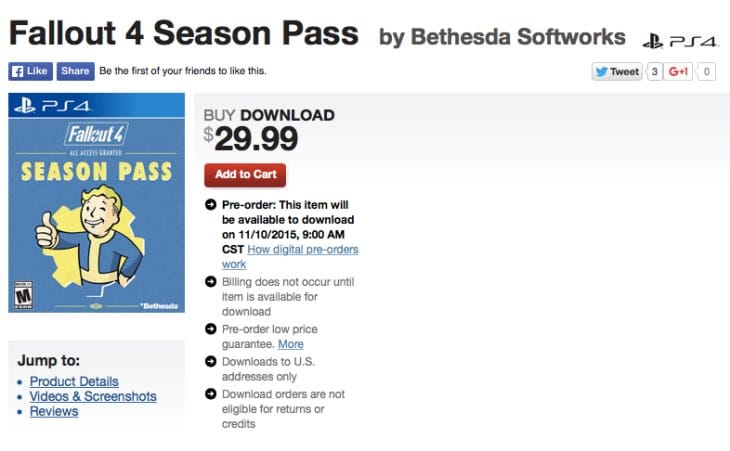 Some of the DLC for Skyrim are the best ever created in our opinion so we know that many of you would like to get your purchase in early.

As far as we’re aware, the Fallout 4 Season Pass PS4 pre-order at Amazon is not available yet despite the Xbox pre-order being live. It’s not out on the PSN store either – hopefully this changes over the weekend.

Are you going to buy the Season Pass early for $30, knowing that the Fallout 4 DLC is going to be well worth it in the long run?