We have some great news now for all you gamers out there who have been deciding whether or not to buy the Bulletstorm game, as it appears that Electronic Arts has just announced that they are releasing a demo for the upcoming first-person shooter.

According to Stephany Nunneley over at vg247.com (sourced from a Eurogamer report), the Bulletstorm demo will be arriving on the PlayStation 3 and Xbox 360 on January 25th. As the report notes, the demo will show off the game’s Echo multiplayer mode. 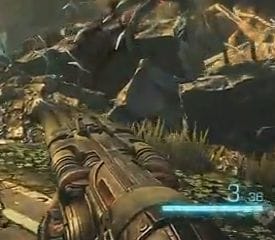 Players will take on the main character Grayson Hunt, as he tromps through a ruined building. The upcoming demo will also unlock optimizations, which players will then be able to use in the Anarchy mode once they buy the full Bulletstorm game.

If you haven’t already heard about and watched the trailer for the upcoming title, then you can watch it now in a recent article by Brett Molina over at usatoday.com. The trailer shows off three of the game’s skillshots — Acid Rain, Mercy and Gag Reflex.

What do you think of the Bulletstorm game? Are you looking forward to playing the demo?