If you are yet to pick up a copy of the ambitious first person shooter Bulletstorm from People Can Fly and Epic Games, there’s a high chance you’ll be searching online for reviews, to make sure you don’t make a big mistake and buy the wrong game.

Well we’re pleased to report, that it doesn’t look like that will be the case with Bulletstorm, as the early reviews we’ve read so far have all given the game a glowing report, praising the new innovative features that gamers haven’t seen in a first person shooter before.

It’s no secret that Call of Duty remains the FPS king at the moment, but how does Bulletstorm cope when placed in a direct comparison? It’s hard to say since the official reviews for the game are yet to go live, but an early, detailed review has already been published online by Attack of the Fanboy, and it gives you a taster of whats likely to follow by the likes of IGN, Eurogamer and Joystiq.

To put it shortly, Bulletstorm is a great deal of fun, mainly thanks to the brilliant skill shot system in the game, which rewards players with points depending on how gruesome you finish off an enemy. Bulletstorm may be perceived as ‘over the top’, but there’s going to little debate that the single player campaign is much more satisying and enjoyable than the campaign offered in the last two Call of Duty games from Activision. 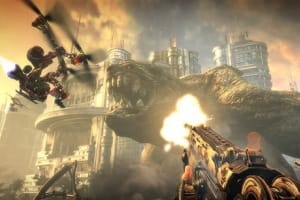 Every game has it’s flaws though, and Bulletstorm is no different. It looks like the biggest complaint which gamers may moan about is the non-existant computer AI which may hinder you whilst playing through the game with AI teammates.

You can read the full review over at AOTF here. They think it’s an awesome game, but for those of you who have already spent some time with it – what do you think? Is this the way forward for the FPS genre, or do you still prefer Call of Duty?