Bugatti has made its intentions very clear that they are to look ahead to the Veyron successor and looking at production numbers for the current vehicle, the successor is getting ever closer. Bugatti said that once they reach 450 production units they would call it a day on the Veyron, and with just 40 more units to go it won’t be long before supercar lovers look for something new from the company.

Another hint that the Bugatti Veyron successor could be sooner than you think is a couple of strange test photos, where we got to see a Veyron with some very weird things going on at the rear of the test mules.

The test car in question was doing laps of the NÃ¼rburgring and at first glance you would think it is just another Veyron, it is not until you see a strange looking aluminum armature where the engine cover should be. It is hard to know just what this is being used for, but one guess is that it could be for data collection. 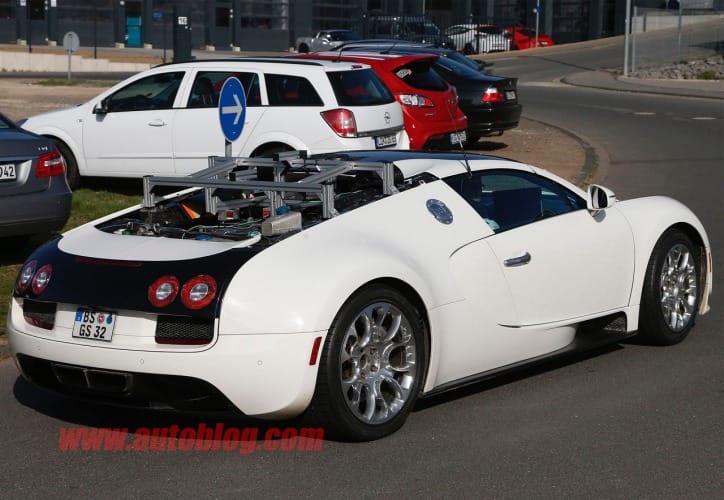 This makes us wonder if there is a new engine hiding beneath, and Bugatti thought it would be the perfect opportunity to test it on one of their current Veyron models?

It is still unclear when the Veyron successor will be released, but Bugatti can’t afford to wait around forever, not when they have the likes of Ferrari, McLaren and Porsche breathing down their necks with the LaFerrari, P1 and 918 Spyder.

Do you think the Bugatti Veyron successor will enjoy the success of the previous models, and how will it compare to the hypercars mentioned above?