Much has been said about the current Bugatti Veyron — well the many variants of it — so we now thought it was time to look ahead to its successor. The new 2014 model will be made up of more carbon-composite material than the existing model, and as you would imagine Volkswagen will make it more powerful and lighter — at a price that is.

Auto Express has a render of what they believe the 2014 Veyron will look like, and you can clearly see that the basic shape has been kept. When you have a car that has been designed to go over 250mph, you know that you are almost at the limits with aerodynamics — well for road going cars anyway.

The former head of Bentley and Bugatti has been telling Auto Express that the next Veyron Supercar will be an evolution of the 1999 design; so we can expect to see some subtle changes here and there. However, it is the technology of the materials that will change the most. 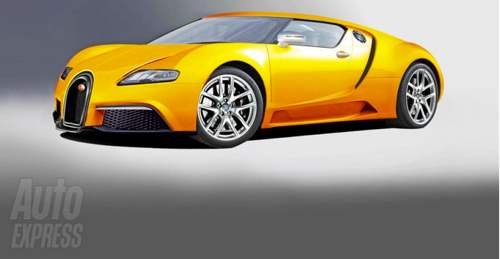 Along with a much lighter frame you can expect to see the same 8.0-liter W16 engine with its quad-turbo system, but this power will then be channeled through a newly revised seven-speed dual-clutch gearbox. Add all this together and you will have a $1.6 million car that will hit 0-60mph in 2.5 seconds and achieve a top speed of 270mph, which is just faster than the 2011 Bugatti Veyron Super Sport.

If you are looking for something just a little different, then there is also a 2014 Bugatti Royale planned. The rumors of such a car has certainly intensified over the past few weeks, but ConsumerGuide Automotive warns that this is all you speculation at the moment, and uncertain if it will ever make it out of the concept stage.

Which of the two would you much rather?