A few months ago GameHouse — RealNetworks’ game division — released a multiplayer game for the Apple iPad called Marble Mixer. The game enables up to four players, or one player and three artificial intelligence opponents, to battle it out as they flick marbles to score points.

Now it appears that the developer has released a similar game called Bubble Bunch for iPad. According to Jon Jordan over at pocketgamer.co.uk, Bubble Bunch is another multiplayer-focused game like Marble Mixer, only this game’s concept is based around match-three gameplay.

The Bubble Bunch for iPad game features three different modes: Aquarium, Rogue Drone and Domination. The Aquarium mode sees gamers playing in an underwater world, where the aim of the game is to create the most groups of 3 or more same-colored bubbles. 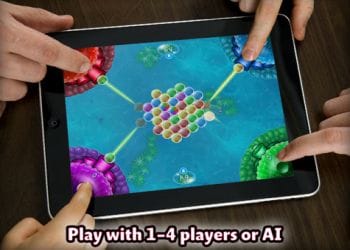 Rogue Drone on the other hand has a sci-fi setting, and sees a villainous droid firing back at players. Meanwhile, the player who exerts color supremacy across the globe in Domination mode becomes the winner. Each mode gives players the option of either bouncing shots off the wall, or using explosive power-ups.

Although the game is currently only available on the iPad, it will be coming to the iPhone and iPod Touch in a few weeks. The Bubble Bunch for iPad game costs £1.19/$1.99/â‚¬1.59 to download and as noted on the itunes.apple.com website, does require iOS 3.2 or above.

Have you downloaded the Bubble Bunch for iPad game yet? If so, what do you think of it?