An award winning game has recently been released on the Mac App Store. Bubble Breaker 1.0 brings the amazing game too users of Mac OS X. Players have to burst as many connected bubbles as they can get to the top of a global leader board.

Released by Mayan Software, players have to plan their moves wisely to achieve those high scores. There are three different game modes, and customizable features allow users to enjoy the game how they want too.

This version of the game has new features added with crisp beautiful graphics, and is currently being featured in the New and Noteworthy section by Apple. Since its release Bubble Breaker has entered the top fifty in the Mac App Store.

Other features include full screen or windowed mode, relaxing music and sound effects, automatic save and resume, and much more. Bubble Breaker 1.0 is available on the Mac App Store for only $1.99. Mac OS X 10.6.6 or later required. 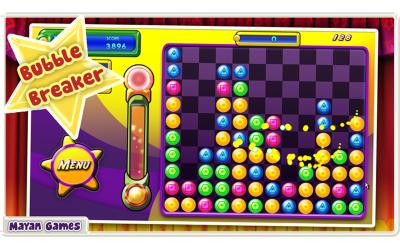