It seems like a complete mystery when customers look at the BT status page and don’t see Infinity broadband listed as down in their area. The problems are much bigger than some people might think, especially considering there’s ongoing issues in Wiltshire, Broadchalke, Portsmouth, Shaftesbury, Newmarket, Milnsbridge, Woolston, Leven, and many other areas not yet listed.

Since we first reported about web browsers hanging and some people switching to Google DNS servers, without much luck in many cases, we’ve seen the BT status page updated each day with another area. This still confuses customers and one Product Reviews reader had this to say, “I looked to see if BT Infinity broadband was down in my area, but it isn’t listed and I am certainly having major problems with connections breaking to pages constantly”.

This particular BT Infinity broadband user was from Kent, although we have one of the PR team in Broadstairs using BT. While their service isn’t completely down, it might as well be after they’ve seen slow broadband for days along with broken connections to pages since last weekend. 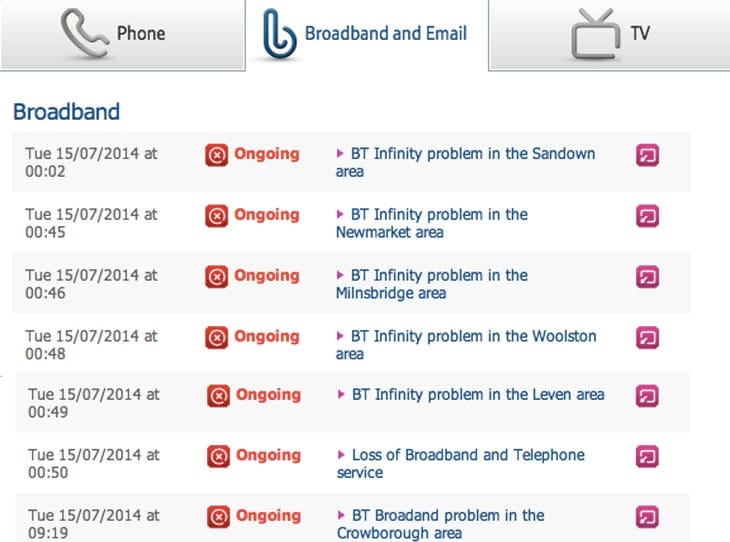 Are you experiencing slow broadband, a total outage, or broken connections to pages with BT broadband? If so, has your town or area been listed on the official fault tracking status page?

It’s also worth pointing out the email issues were marked as solved, but we’ve heard from some people still getting sign in problems.

At the time of writing some people in Broadstairs still have issues and this town isn’t listed as a problem area. Share a comment below if you have any problems with email or broadband from BT, and of course let us know the area you’re in and if you’ve been listed on the status page.