It looks like Supercell is beginning to encounter an problem on regaining the support of many Clash of Clans players who believe that the last update for the game did more harm than good.

Specifically, many players want Supercell to ‘bring back the old Clash of Clans’ with the old shield system which they believe makes the game more balanced.

In its current state, players are complaining that the new system makes it easier for hardcore players to pick on weaker players, with the old easy shield system making it a lot more manageable.

The result of this update has left a sour taste in the mouths, and we can see that the official Clash of Clans Facebook page has transformed into an angry mob of fans who are just leaving ‘bring back old Clash of Clans’ as their comment under every official post. 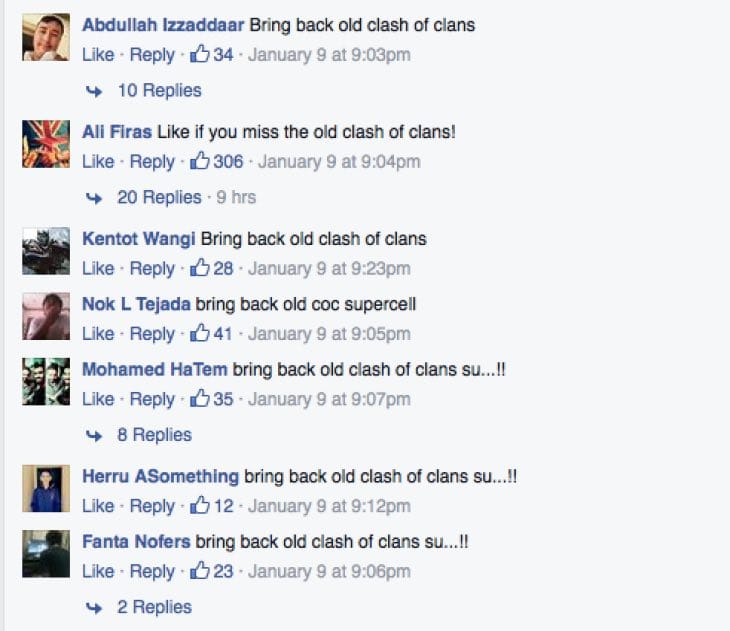 In the meantime, many players say that if Supercell do not bring back the old changes before the TH11 update, they will jump ship to rival games such as Castle Clash by IGG.

Some have already done this and Clash of Clans numbers may drop further this year if Supercell don’t make the changes.

Having said that, Supercell has already responded to the outage in an official forum post, in which they say that they have no intention on bringing back the old shield system in Clash of Clans, stating that they will instead focus on improving resources.

What are your thoughts on this? Can you admit to moving over to Castle Clash due to the new changes with Clash of Clans after the Town Hall 11 update that you are not happy about?