A hugely popular game for iOS devices has just received a major update. Boxhead — The Zombie Wars 3.0 is available for owners of the iPhone, iPad, and iPod Touch.

Released by MEDL Mobile, Inc the game was already a hugely successful game on the internet before it was brought to iOS devices. Boxhead already has more than 25 million players worldwide, with over 250 million rounds played so far.

Players take on the role of Jon Bambo who has an array of deadly weapons at his disposal, as he takes on a mass of flesh eating zombies.

You will also be up against fire breathing demons, and the game starts off easy at first. But as you progress your enemies not only increase, they also get stronger and harder to beat.

Your hero starts off with a basic pistol, but as you kill more of your enemies the better weapons you get. Too stay alive you will have to use offensive and defensive tactics.

The update brings a host of new weapons which include an Uzi, hand grenades, rockets, and airstrike. These are added to an already impressive range of weapons available, which will have you killing zombies for ages. The game has received many great reviews from users already addicted to playing the game, where you will find colorful graphics and intuitive game play. 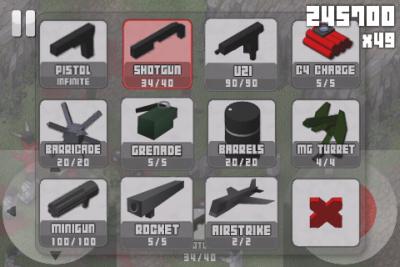