It’s Friday and you are at a lose end, and so you have to turn to your gaming console, but wait, you know there is a new game out, one that demands your attention and so there is only one thing for it, part with some of your hard earned cash. The next question on your mind is, what game to go for?

Today in the UK saw two game releases, F1 2014 and Borderlands: The Pre-Sequel, both of which are for the Xbox 360, PS3 and the PC, which does show there is no lack of support for the previous generation consoles. If you are looking for a game that has awesome and strange guns, then you need to get down to your local store to pick up your copy of Borderlands: The Pre-Sequel. 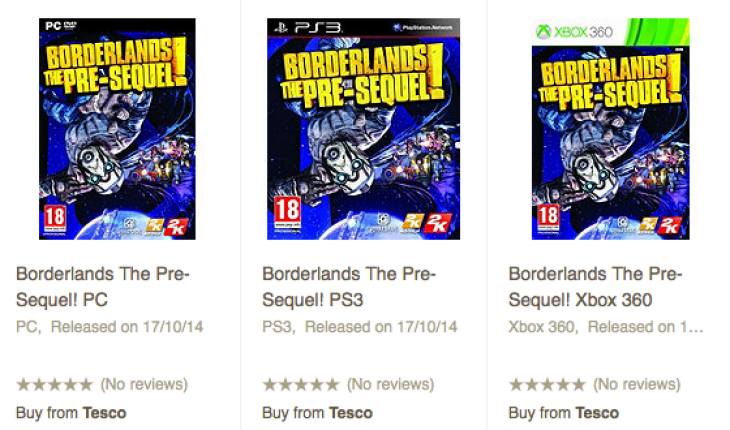 Borderlands: The Pre-Sequel price at ASDA – If you head to your local ASDA supermarket you will see they only have the Xbox 30 and PlayStation 3 versions of the game at a price of just £30 each, which is rather impressive for a new game.

Borderlands: The Pre-Sequel price at Tesco – If you were hoping to get a better bargain at Tesco, then think again, as ASDA has them beat. Here you will find the game on the Xbox 360, PS3 and PC, prices of which are £32, £32 and £30 respectively.

Will you be getting Borderlands: The Pre-Sequel or are you annoyed it is not coming to the Xbox One or PS4?