Hasbro’s line of Bop It audio games have been around for a fair few years now, and appears to have become hugely popular with both kids and adults alike. If you’re one of the many that have tried and enjoyed playing one of the Bop It toys, we may have some great news for you.

Thanks to Electronic Arts, the popular Bop It! game has now been made into an app for the Apple iPhone. According to a recent article by Jon over at fonehome.co.uk, the Bop It! game is similar to that of Simon Says, but with an extremely fun and physical twist to it.

After listening to the verbal commands, players must then interact with all the colorful “Bopjects” by twisting, touching and swiping across the screen accordingly. The application enables players to do this through accelerometer and multitouch controls. 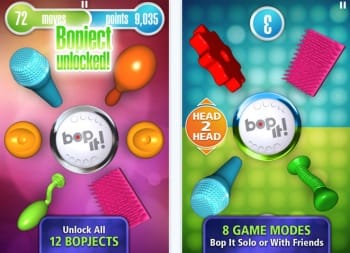 The Bop It! app provides users with four different single player modes — Classic, Basic, Extreme and Blitz. However, if you’d rather play the game with friends, then 4 further modes are available. This includes Pass It Basic, Pass It Extreme, Head 2 Head and Blitz Challenge. 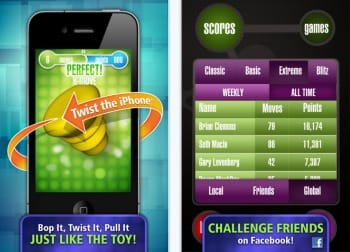