If you haven’t been playing Clash of Clans Clan wars, then you might be waiting for the Boom Beach Android release that has been confirmed to be coming without an exact date set at the time of writing. The Clash of Clans popularity is clear with over 2 million ratings on Google play and Boom Beach received thousands of downloads on iPad and iPhone, but is yet to grace Android phones and tablets where it’s almost certain to be successful at launch.

Both games are by Supercell, so this highlights both how popular the developer is and the demand for Android users to see Boom Beach release for Android devices. At the start of this month we highlighted the Boom Beach Android wait and detailed the way this developer makes money, which is just like a lot of games these days with a free download to get users addicted then by offering in-app purchases than can almost reach $100.

The best Boom Beach Android alternative – Other than Clash of Clans, one of the best alternatives to Boom Beach on Android is Battle Beach. This app certainly has a similar name and along with it makes money in the same way with in-app purchases, although it’s created by Ember Entertainment. 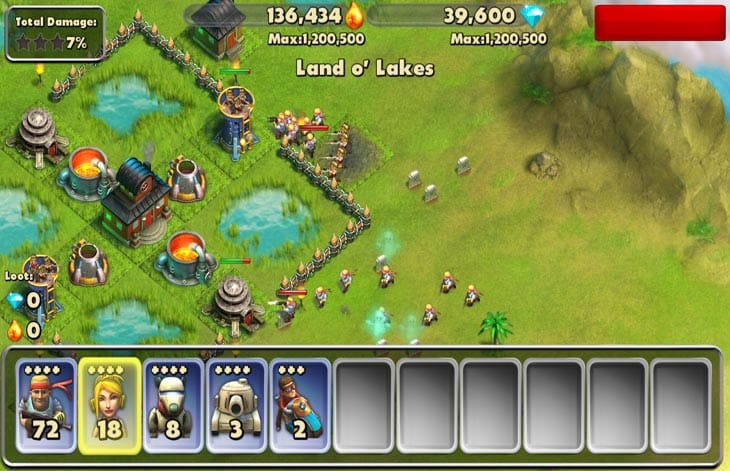 Thanks to the demand for Boom Beach on Android, you can see there’s been thousands of downloads with over 47,000 ratings on Google play averaging 4.5 stars. This reveals that the game delivers mobile app strategy that some people require, but how does it compare to the desired Boom Beach? If you’ve played both versions, of course that means iOS for Supercell’s offering and Android for Battle Beach, then leave a comment with your quick review.

What do you think is the best game between Boom Beach, Clash of Clans, and Battle Beach?

We have embedded some gameplay below this article for Battle Beach, just in case you haven’t played it on Android yet, so have a watch and feel free to leave your opinion in the comments.

If you are waiting for Boom Beach on Android and hoping to see new features not on iOS, then you might be a little disappointed thanks to the developers recently ruling out some requests for now. On the official Boom Beach forum a thread stated that these requests have been ruled out for now: Hidden mines, clan/alliance system like Clash of Clans, aerial attack and defence mechanics for player bases, revenge attacks, resource donating or trading, national flags, walls, and more builders.

We might see some differences to Boom Beach for Android, so feel free to leave your wish list in the comments and if you know another Android alternative then also share.