We have a treat for FIFA fans now. EA has gone live with the full FIFA 16 trailer and within it was the confirmation of a new FIFA 16 skill featuring Crystal Palace star Yannick Bolasie.

As a result, when FIFA 16 launches you will be able to do the Bolasie ‘360 with a flick’ skill move in FIFA 16 and now we can show you what it looks like.

The beautiful move against Tottenham’s Christian Eriksen has been recreated in full on the FIFA 16 engine. Now, we can show you what that looks like in-game along with a comparison with the skill in real life thanks to a HD GIF.

This beautiful move can be seen in the FIFA 16 trailer below, when you pause at the 0.40 mark – it looks amazing to be honest.

Let’s hope that the visuals when performing this move in an actual game of FIFA 16 will look just as good too – maybe EA should incorporate a split-second feature where the camera zooms in when performing a difficult skill move. 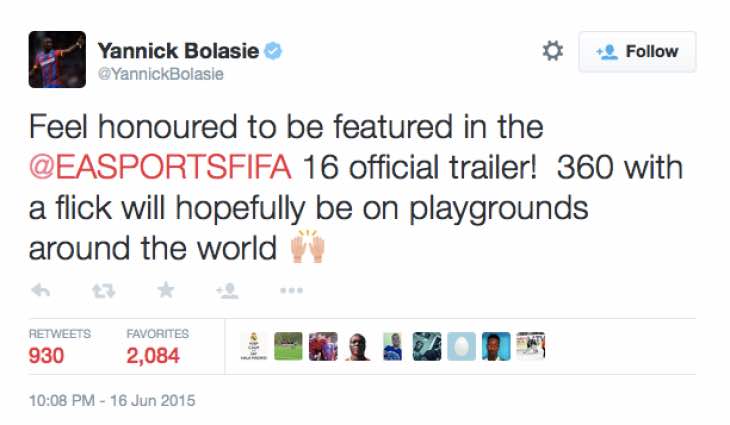 Enjoy this comparison and let us know what you thought of the FIFA 16 trailer. Are you happy that Bolasie’s amazing skill is in the game, also what other new FIFA 16 skills and celebrations do you want to see from EA, compared to FIFA 15?

Hopefully EA will share another video soon, showing us how to do Bolasie’s 360 flick skill in FIFA 16 as we’re sure most of you will want to learn the buttons beforehand to get some practise.